CEA-List partnered with Orano on the extreme miniaturization of gamma detection technology, resulting in the world’s smallest gamma camera. The pocket-sized, super-light camera offers quasi-real time imaging of radiation hotspots, making it a crucial tool for working in radiative environments.

The ability to identify and localize gamma radiation hot spots is crucial when working in potentially radioactive containers. Hot spot mapping is key to ensuring operator safety, and real-time monitoring helps to make sure work runs smoothly. Data collected in the field can also be reused in planning future work.

At Orano’s nuclear fuel reprocessing site in La Hague, highly radioactive waste from French reactors is held in shielded hot cells which cannot be accessed by human operators. Reprocessing operations are carried out remotely, with tools inserted into the cells through openings of under 10 cm in diameter. 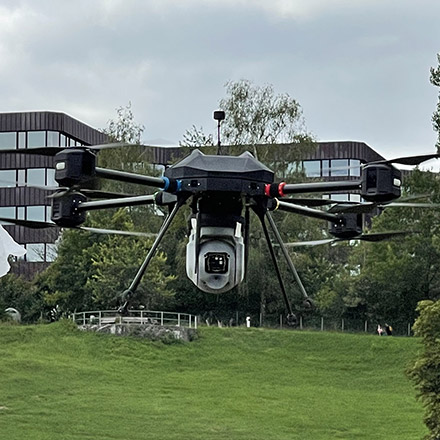 Areas of intense radioactivity can be identified using gamma cameras, which superimpose a map of gamma-emitting sources over a standard image. However, existing cameras were too large to fit through hot cell apertures and too heavy to handle using remote-controlled robotic arms, due to the thick lead casing used to protect them from the effects of gamma radiation. A new, smaller solution was desperately needed.

The first digital gamma camera developed by CEA-List, the Cartogram, had a diameter of 40 cm and weighed in at 17 kg. In 2010, CEA-List brought out a new, more streamlined model, the GamPix, commercialized by Mirion Technologies under the name iPix; this device measured 18 cm across and weighed around 2 kg. This still wasn’t small enough for Orano, who contacted CEA-List for help in developing an advanced, miniaturized gamma camera.

The aim of the NanoPix project was to design a camera with a diameter of less than 8 cm, small enough to fit through the endoscope apertures in the hot cells at Orano’s La Hague nuclear reprocessing plant.

The first NanoPix prototype was released in 2018. Half the size and ten times lighter than its predecessor, Gampix, the camera sent shockwaves across the nuclear technology world, winning first prize in the innovation category at the World Nuclear Exhibition (WNE) competition. The first NanoPix weighed just 286 g, making it the world’s smallest coded mask gamma camera, and performed well in on-site tests at La Hague and Marcoule. 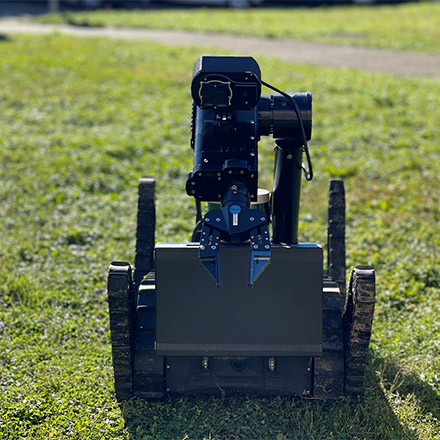 While the new camera was small enough for its intended purpose, there was still room for improvement: three 15-meter-long USB cables were needed to operate the device, for example.

The fact that the mask placed in front of the camera and used to identify the source of radiation (see below) could only be rotated manually was also problematic. Technicians were forced to retrieve the camera after each measurement, rotate the mask, then re-install the device in exactly the same place: a tedious, time-consuming approach.

Additionally, the camera used three different programs—one for visible spectrum imaging, one for gamma detection, and a third for result visualization—another area which called for optimization.

The second version of the NanoPix, completed in late 2019, included an ultra-miniaturized piezoelectric motor for automatic mask rotation. The three USB cables were eliminated in favor of a single 200-meter Ethernet cable, using Power over Ethernet (PoE) technology for both energy and communication. Finally, the three programs used in the earlier version of the camera were replaced by a single, integrated software solution.

These changes meant that the new NanoPix was heavier, weighing in at 412 g. However, this increase in mass was offset by significant performance improvements:

Because it has its own power supply, the new camera can be attached to a drone or robotic vehicle, and onboard intelligence allows the camera to construct final images independently.

Building on the success of the NanoPix project, CEA-List is currently working on developing the next generation of gamma cameras. In addition to detecting and localizing gamma rays, the new devices should be able to identify the source of neutron emissions in radioactive materials. Special scintillating polymers can be used to detect both neutrons and gamma rays and can differentiate between the two. With so many future developments to look forward to, the NanoPix adventure has only just begun.

Like its predecessor, Gampix, NanoPix uses a 256 x 256 pixel gamma detector. The interaction between a gamma photon and a pixel produces electrons, which are recorded as an electrical signal thanks to the electronic components associated with each individual pixel.

The camera uses a coded mask collimator: a sheet of metal with an array of punched holes. The holes are arranged in a way that modulates the detection of gamma radiation by the pixels, and the mask has a damping effect on rays that do not pass through the holes. Rotating the mask changes the detection pattern. The origin of a signal can be pinpointed over the course of multiple iterations, using a program which includes an exhaustive list of pre-recorded patterns for all possible angles of incidence. The mask database is so detailed that multiple hot spots may be identified simultaneously. The NanoPix camera features a miniaturized, precision mask, using an arrangement of electronic chips less than one millimeter apart.

Despite its small size, this camera is just as effective as larger models. It can measure radiation from barely perceptible levels right up to high-intensity activity